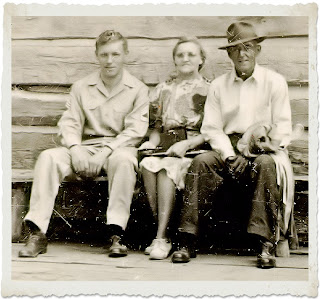 AM I AN OLSON?

My Grandmother Ribling died when I was very young. I remember meeting her only two or three times. I recall a stern lady. She was nothing like her husband, John Earl Ribling, who I loved dearly and who loved me just as much. I knew nothing about Grandmother until many years later. Her maiden name was Georgette Lydia Peterson. I found out in the 1930 census that both of her parents were Swedish immigrants. I do not know what their names were and neither did my father. Daddy did say that Grandmaother was born in Stillwater, Washington Co., MN.

My Grandparents lived in Beardstown, IL. My Grandfather worked Maintenance of Way for the Burlington and Quincy RR. Grandmother ran a lunch counter and my father was a soda jerk. My grandparents also owned or managed a boarding house in Beardstown. My father told me the following story of a strange event in his life. One day when he arrived at the lunch counter after school he saw that his mother was speaking with a man he had never seen before. When she saw Daddy, she said, “Come over here and meet your real father,” and then she laughed. The stranger's name was Olson. He had two sons, Roger and “Bud”. My father never saw him again and never asked his mother about the man. After that event my father received Christmas and birthday cards from his “brothers” Roger and Bud. He may have met Roger. The Olsons lived in Minneapolis, MN.

Apart from what Daddy recalled from his childhood and a few photos of his mother, I know nothing about the Olson family or how my Grandmother came to be Mrs. Ribling. Why would a woman with three children take one of those children, the youngest, and leave home. How did she come to marry grandfather Ribling? I suppose I will never know the answers.

My father was born April 5, 1919, in Minneapolis, Hennepin Co., MN. he had no birth certificate, not even a recreated one. He told me that he got into the Air Force using a Census record. He served thirty years in the Air Force.

I began to research my family history in 1990. I found the 1930 census record for my father and grandparents:

Recently I found a 1920 census record that could include my Father and Grandmother. If this lady is Grandmother, it seems to confirm the story that Daddy told to me years ago. Everything fits pretty well except for the age of the lady.

I may never know the story of Grandmother and her family. The names Peterson and Olson are very common in Minnesota, too common to check them all. I found more than one “Swan Olson”, more than one “Lydia” or “Georgette Peterson”. I live very far from Minnesota, too far to travel there. If I were fortunate enough to go to Minnesota or wealthy enough to hire a researcher, how could these families be found? I believe that this will remain a mystery, one of many in my ancestry. This is something I would love to solve though. I would like to know, am I an Olson?

Posted by Barbara Ribling at 8:02 AM No comments: